The best place on the web to talk about Ninja Turtles!

Well, it's just another Manic Tuesday, but strange stories are popping up all over the world!

While the subjects of our top story today are not ninjas...yet, they still have super-dee-duper abilities that set them apart from their peers...enough so to warrant a story!

A local businessman in China reportedly bought a rather special turtle in March of 2006, and since then, things have been a little strange.
Jui Jintzu Smith came forward to authorities more than a year after purchasing a two-headed turtle named Huey (on Mondays, Wednesdays, Fridays and Saturdays) and Winston-Salem (on Sundays, Tuesdays and Thursdays) from a local animal market, which, of course are illegal in the United States, unless you call it a Carnival. He says that the turtle's heads cooperated well together. That is, until turtle adolescence, when Winston-Salem began to prefer pepperoni pizza to his normal stinkbug omelette, and dragged his counterpart, Huey, who is the intellectual of the pair, around Smith's apartment, seeking out leftovers and trying to sleep in the old sock pile to the right of the front door. Smith, who has a sock "problem", admits to wearing each pair of socks only once before discarding them beside his door and leaving them there to sit in a never-laundered heap, until New Years, which in China, lasts a full three weeks before ending in a firework extravaganze, often featuring a female chinese soldier who uncovers an assassination plot against the Emperor and saves the nation. Smith apparently saves his socks to set them ablaze, 17 pairs per day of the festival, causing his smoke alarm to be activated each and every year, and proving that, once again, people born in the Year of the Dragon really DO love flames.
Amidst his ritualistic burning, Smith found time to contact the authorities, apparently finally fed-up with the nightly visits he has received from an intruder. Described as a tall samurai, with a spiky helmet and shoulderpads who breathes loudly, the prowler often mutters things, but Smith has only ever been able to pick out two words: "Turtle soup."
Awakening precisely between 11:11 and 11:14 pm, Smith hears shuffling from all of the way across his 32 square-foot apartment, and leaps out of bed in the same manner every night to catch the intruder, only to be eluded each and every time.
Smith said that he wasn't concerned until he caught the nocturnal glimpse of a rather tall man with a brain in his torso, who didn't accompany the original prowler until last night.
They also turned on his TV to watch reruns of "The Green Hornet."
Smith is concerned for his safety, the safety of his pets and his cable bill.
Anyone who has any information should contact the local game warden, police, Emergency Medical Service, Marines, Samurai, and Smith's godmother, Ethel Harlow, who resides in Harlem. 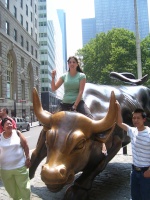